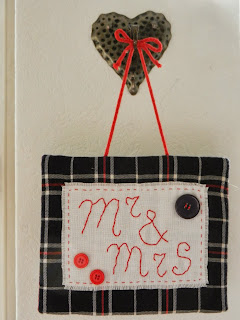 Being married to your best friend is simply magical. Now, you know I'm not married myself & that hasn't changed since we last spoke ;) But my parents have been married for many years. Today they are celebrating being Mr & Mrs, as it's their anniversary...

I'm not a wedding fanatic, don't dream of white dresses & grooms in a tux releasing doves. Simplicity and sincerity is what counts, but I do like some handmade things that remind you that love really matters. So I made Mom and Dad this fabric sign as a little something to let them know I care :)

It's not great (in fact I think it's "slightly" flawed) but I wanted to make a surprise & things did not go entirely to plan. It's the thought that counts isn't it?! Mom said she liked it, I believe she was being kindness itself as usual. I'm sure the meaning behind it was appreciated & my Dad isn't into girly romantic things anyway. 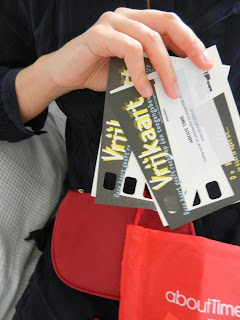 He didn't even care to join Mom & me to the movies. We went to see that new romcom About Time. Where the guy can travel back in time & change his live and that of those he loves. It was an enjoyable film. Mom and I had a great day out, though we didn't laugh because of the jokes in the film. We did giggle about how we almost ended up watching the wrong film:

The gentleman behind the counter had accidentally given us the wrong tickets. Luckily the guy at the door asked if we ladies came to see the film Turbo? Mom and I looked at each other and I immediately said NO, we have tickets for About Time. But we didn't & we had to go back to exchange them. As we waited for the gentleman behind the register to print new tickets I spotted the poster promoting the film Turbo and pointed it out to mom.

Oh dear it was for children, a huge animated snail was smiling at us! That's when I got the giggles and mom's eyes also twinkled with laughter. The guy at the door had saved us from an unpleasant surprise :D When the film was over Mom called Dad on the Phone & he came to pick us up again. She said in the car: "Shame you didn't see the film, but lovely to see you again. Let's make a big pot of tea at the cottage & have a little treat to go with it." Which we did, it felt good to be home & a family again. 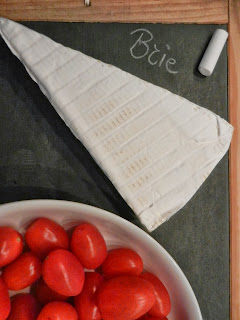 Though it was ordinary for me growing up that mom and dad were married, always doing things together. I do realize now that sadly (in today's society?), it's not a natural assumption to think that saying I do is forever. Or ensures a HEA... I hope it shall be like that for Mom & Dad. Everything I see points in that direction and I'm thrilled they have a such good relationship.

It was the same with my maternal grandparents I'm told. I never knew my grandfather, but the stories I collected in my heart over the years, give me the idea that they too had a partnership based on love, trust & true friendship. Just like grandma's parents had. That's everybody's dream I think. How fabulous would it be for this part of family history to repeat itself!
﻿ 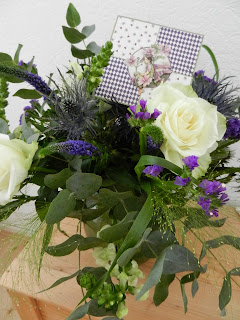 Well, I'm going to drink tea with the happy couple downstairs. Little things came up and so far it's been like almost any other day. We shall change that in a minute! They called me twice already, but I was catching up with you & at the same time giving them a moment together to remember their special day. See you back here at Pale Rose soon!

Jo's Daughter
At my home Pale Rose Cottage we are surrounded by a flow of cute craft projects, cups of tea, cozy chats and cat cuddles. We enjoy cooking good food, creating homemade happiness and spending time with special people. So stick around to join the fun!